I have been running FreeNAS on an HP G7 N54L ProLiant MicroServer for a few years, including running an Ubuntu Server VM in VirtualBox running in a FreeBSD jail.

However, VirtualBox support in FreeNAS had been deprecated, and as of FreeNAS 9.10.2 it is broken and won't be fixed.

FreeNAS 9.10, however, includes support for an alternative in the form of bhyve. In FreeNAS 9.10, it can only be managed using the command line, for which a tool called iohyve is provided.

Warning FreeNAS 10 is due for release in late February and there currently isn't a migration path planned for iohyve VMs. In fact, iohyve support on 9.10 is said to be experimental (although I would say that is far from made clear in the documentation). It's not clear at this stage what exactly will happen to the VMs on upgrade to FreeNAS 10 (once released), but I would hope a similar process to this could be used to migrate VMs.

As I found my VM broken after updating to FreeNAS 9.10.2, I set about trying to migrate the VM to bhyve using iohyve. Putting together various bits of information I found online, I was able to successfully migrate the VM, and here's how I did it.

Before attempting to migrate your own VMs, take note of the following points:

First of all, check the version of iohyve included with your FreeNAS build. You can do this via SSHing to your FreeNAS box and running iohyve version:

(The SSH user name and password is the same as what you use to access the web interface.)

In order to set iohyve up, you need to know the name of your primary network interface and the name of the ZFS storage pool you want to use. (Within that pool, iohyve will create an iohyve dataset to use to store VM disks, ISOs and firmware images.) 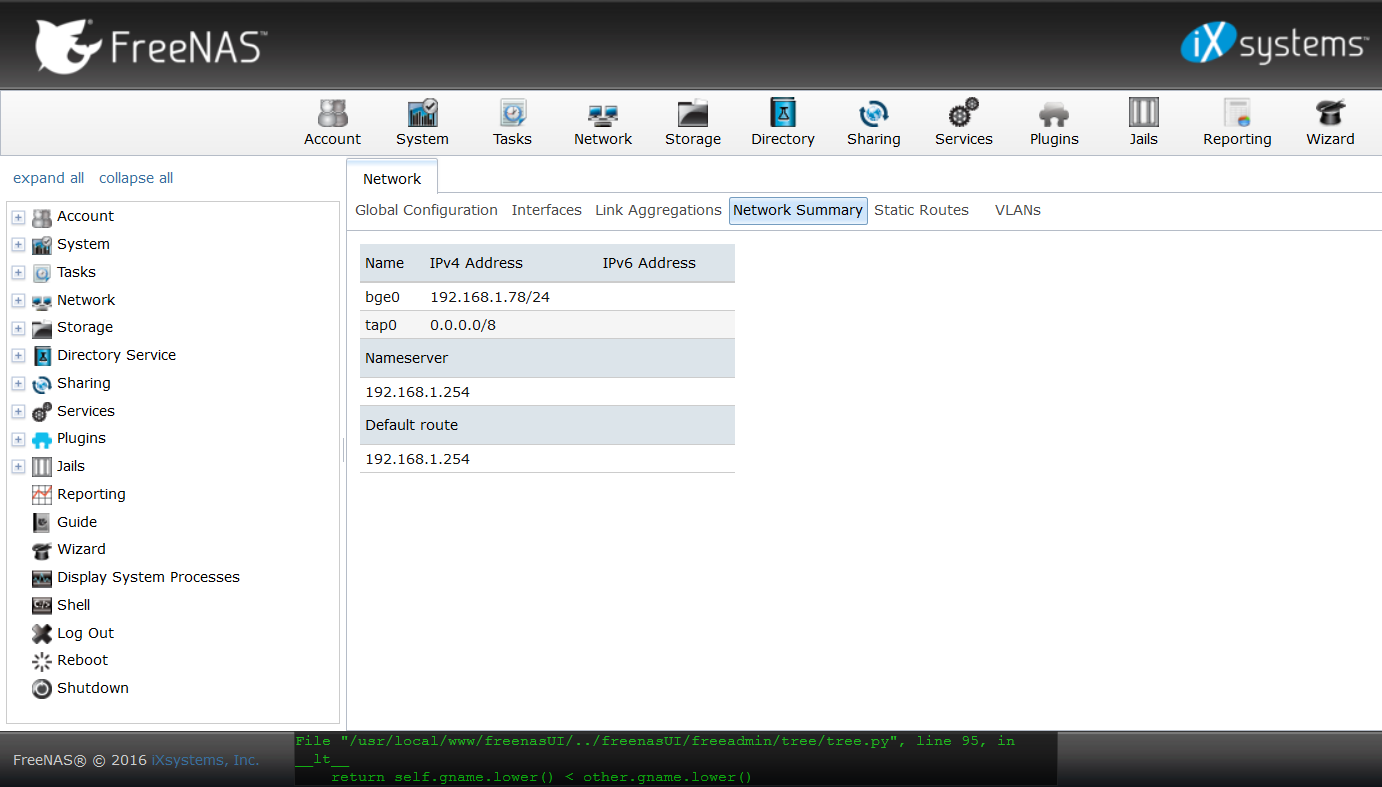 In my case it was bge0. If you have multiple interfaces listed, look for the one with the correct IP address. (You can also use ifconfig in your SSH session if you prefer.)

If you don't know the name of your ZFS pool, you can also find that out from the FreeNAS web interface, in the Storage section on the Volumes tab. The top-level items are the ZFS pools (but referred to as volumes in the GUI). You can use zpool list in your SSH session to obtain a list of pools and their names if you prefer.

Armed with that information, we can now run the initial iohyve set-up command. To do this, run:

(substituting the network interface and pool names for the placeholders). For example:

(You can see what the not-found function does in the iohyve source code.)

If your VM is still working within VirtualBox, make sure it is turned off. Then, start a shell session within the jail:

Note If you are using a VirtualBox installation elsewhere to convert the disk, the command has been changed to from VBoxManage clonehd to VBoxManage clonemedium disk in newer versions.

Create the iohyve VM and disk

Next we need to create the iohyve VM and disk. To do that, we need the path to the raw disk image outside of the jail. We'll also need to make a note of the image's exact file size. In my case the disk image was at /mnt/ZFS/jails/virtualbox/tmp/ubuntu-server.raw and was 8589934592 bytes:

To create the iohyve VM, run iohyve create <vm name> <disk size> (picking a name for your VM, and using the size of disk image you just noted). For example:

Refer to the iohyve README for more details of the parameters. You'll also find examples for different OSes there (however, the only place I found a full list of available OSes was in the iohyve source code).

You'll need to use loader=grub-bhyve if the guest OS you're using is using the GRUB bootloader. (Don't attempt to install grub2-bhyve in FreeNAS itself as it's already included and the FreeNAS OS isn't designed to be modified.)

Copy the disk image to the new VM

The VM disk should be at /dev/zvol/<pool name>/iohyve/<vm name>/disk0. Use your preferred utility to copy the RAW image to it. I used dd:

It is likely to be harmless (depending on the content).

Now, you can connect to the VM's console using iohyve console <vm name>, for example (you may prefer or need to do this in another shell session):

At this point, I could press a key and see the Ubuntu login prompt. (Since the VM had successfully started up, I was also able to SSH to it.) If you see GRUB or similar in the console it is something may have gone wrong at some point (e.g. wrong OS type configured).

Despite the output above claiming ~​~. quits the console, for me it was ~. (and ~? for help). (See the cu(1) documentation for more information on console commands.)

Set iohyve and the VM to start on boot

To keep iohyve working after a reboot, you need to set some tunables in the FreeNAS web interface. In the System section, on the Tunables tab, add two rc.conf entries for iohyve_enable=YES and iohyve_flags=kmod=1 net=<network interface name> (using the network interface name from earlier). Afterwards, the page should look similar to this:

Update 17 January 2017 After upgrading to FreeNAS 9.10.2 U1, I found my tunable entries had been lost and so I had to recreate them.

To set the VM to start on boot, run iohyve set <vm name> boot=1. For example:

Shares and tidying up

VirtualBox had functionality (which I had been using) to share directories between the host and guest VM. I couldn't find equivalent functionality in iohyve, so I used network shares instead. I added the CIFS share for the directory to /etc/fstab in the VM using one of the available guides (don't ask me why there are two):

(You can, of course, use whatever network sharing protocol suits you and is supported by FreeNAS. CIFS was just easiest for me.)

Once you're happy with how the new VM is working, you can delete the old VirtualBox jail (and the raw disk image we created earlier) if you no longer have a use for them.

My VM was up and running again at this point. So far I've been happy with it (certainly happier than I was with VirtualBox on FreeNAS).

I found the following resources useful when converting my VM and documenting the steps I took above. You may find them useful if you have further questions.

This one has been an ongoing problem for at least several months. I have been able to reproduce it on every Windows 10 PC I encountered, and there are references to the problem all over the internet. And yet the problem still exists on

I had repeatedly encountered useless links in Microsoft programs, and I knew Windows 10 was no exception to this. Here I was in the Display Colour Calibration applet, wondering what it exactly it does, when I saw a 'How do I calibrate my display?