So, after my supposedly high end 7900GT fell to pieces, I thought it may be worthwhile investing in a Zalman VF900-Cu cooler for my warranty replacement 7900GT when it arrives (in the hope it would protect me against the fan failing again). So I check Zalman's website - great, its compatible with my 7900GT, so of I go to order the thing...

A few days later, everything arrives, so I put the card and the VF900 together. It was fairly straightforward and didn't pose any real problems. But then came installing the card into my PC - and I hit a big snag. It turns out the cooler is compatible with my card, but not quite my Asus M2N32-SLI Deluxe motherboard it seems! Behold the photo I took below: 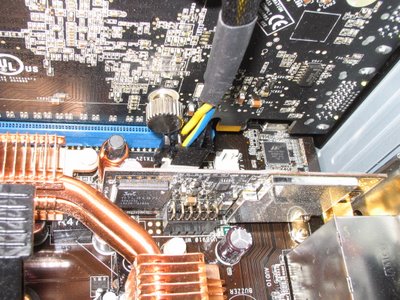 As you can roughly see, the 4-pin 12V connector on the motherboard is now obstructing the screw/bolt on the back of the card, and the card will not slot in! Yes, great design on Asus's part by putting the 12V connector in such a stupid place.

In the end I had to sacrifice my Audigy sound card in the top PCI slot and put the 7900GT in the bottom PCI-E x16 slot. It is also now pretty much touching the PCI card in the bottom slot and causing bad heat build up there. Of course I don't have much choice - the stock fan is loud enough to be heard upstairs!

In summary, if you have the Asus M2N32-SLI Deluxe motherboard, and a 7900GT, don't even think about putting the VF900 on it! Hell, it's even a good enough reason to avoid the M2N32-SLI Deluxe board for me!

I am more and more regretting my purchase of the M2N32-SLI Deluxe motherboard (over the Gigabyte GA-M59SLI-S5). Since I have started to use the on-board ADI1988b audio (after having to pull my Audigy out of the computer) I have noticed a slight intermittent problem:

So, you happily set up Vista RC1 to install and leave your computer alone whilst it does so. But when you come back, the monitor is off... strange. Computer doesn't seem to be doing anything, so you give it several minutes but nothing happened